This is a hard story for me to put into words, to share the depth of emotion that goes behind this child and this family.

Erin Maniscalco is a strong woman, and one of my closest friends.  From the beginning, I watched in awe as she took in stride the knowledge that her unborn son had a congenital heart defect and would have to undergo open heart surgery as a newborn.  And again later, as an older infant.  We were pregnant at the same time -- her baby boy due in January, mine in early February -- so to see her go through this was inspiring, humbling, and heartbreaking.

I remember listening to Lincoln's first heartbeat and crying.  It was just this sudden rush of tears I didn't even realize were coming.  I remember being pregnant and thinking, "Man, I hope nothing happens."  I remember going through the ultrasounds and being reassured that everything looked "great" and "perfect" and "normal."  Even with my high risk pregnancy and all the crazy bleeding and bed rest that occurred with it, the ultrasounds were reassuring.  "The baby is developing normally.  We can't figure out why this is happening to you."  I know we've all been there.  Even if you have no signs of any problem, you go into the ultrasounds scared, wondering if there is some sort of bad news.  You can't help that little worry at the back of your mind; what if? what if?  That's part of being a mother.  That's part of being pregnant. 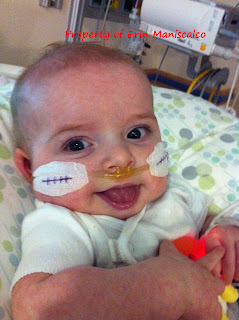 For Erin, it ran a little different.  I can only imagine what she felt when they first discovered her unborn son's congenital heart defect.  And even my imagination pales, I'm certain, compared to the feelings she had that day.  And ever since that day.  Despite that, she thrived in her pregnancy, and she gave birth to the sweetest little boy.  We call him Sonny.

From the beginning, Sonny was a fighter.  He had his first open heart surgery in February, when he wasn't even a month old.  He had his second in July, 6 months old.  And on November 3rd, 2012, 9-1/2 months old and recovering amazingly after his surgery just a few months prior, he suffered a sudden stroke at home.  He was medevaced from his local ER to Children's Hospital, where he is right now, recovering, with his mother and father by his side.


Here are some pictures, words, and snippets his mother wrote, just to share this sweet little boy and their joys and struggles.  Her words are more eloquent than any I could ever, ever write: 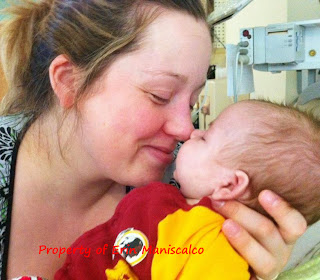 February 10, 2012:  Saw that beautiful chest the way I made it, for the last time today.
(The day I saw her write this on Facebook, I cried.) 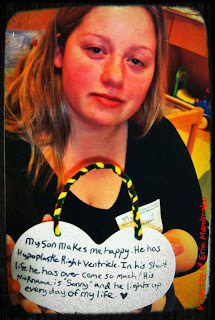 February 14, 2012:  Today is not only Valentine's Day but it is more importantly to me National Congenital Heart Defect Awareness Day.  If you know me then you know a person who has a child with a congenital heart defect. My son's heart is missing it's lower right chamber, and as I write this I am sitting at his bed side at Children's National Hospital as he recovers from a surgery that is the first of several to help mend his broken heart. I have seen him through so much in this past month. I have witnessed his silent cries with his ventilator tube stuck down his throat. I have held his tiny hand as he suffered through endless IV sticks and blood draws and wound dressings. My child's heart is broken. But by the dedication of countless doctors, nurses, specialist, by the love of his family and by the grace of God, he is alive and getting stronger every day. So this Valentines day isn't just a day to celebrate love and get candy or jewelry or cards or a fancy dinner. For me, today is a day where I celebrate the LIFE of my son Lawrence Michael Maniscalco for being the most heroic 1 month old boy I have ever met. He is my tiny hero, my Superman. He is my CHD Valentine. 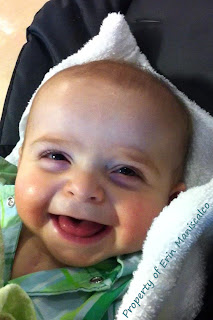 February 23, 2012:As these past few weeks have gone by it felt as if I would never see him do it again...the hours I have spent at his bedside, stroking his fuzzy head, comforting him, talking softly, singing gentle lullabies, still I have seen in his face, his pain and discomforts, sometimes an exhausted sleep. He is getting better every day, slowly the pain is becoming less and less for him.
Tonight, during our bedside chat as I am telling him for the hundredth time how handsome he is and how brave he has been and how proud I am and how much I love him. I gently run a finger down the bridge of his nose...then I see it, a little flash...I think to myself "was that what I think it was?" quickly I stroke his nose again...nothing, I tickle his chin and, yes there it is! A Smile. I can't help but tear up at the beautiful site! My baby boy smiled for me tonight. :)


HOW YOU CAN HELP
There are donations being collected for him and his family.  All proceeds go to their medical bills and food, gas, etc during his hospital stay.  His family has a 2-hour commute to the hospital and a 2-year-old they need childcare for during their visits to the hospital.  They are missing work to be there at their son's side, which means money lost.  To a family already struggling, this is a lot to bear.

If you find it in your heart to donate, even $1 can snowball into hundreds.

Please -- keep this boy and his family in your heart and prayers.  Share his story.  And even if all you can do is pray... Please pray for Sonny and his family.

You can donate here.

Or, Tutus by Lafue is running a promotion where all proceeds of their red Heart Awareness tutus go to Sonny's fund, for the entire month of November.

And, Pirate Kids by Mkraz22 is donating 5% of all sales (at full price, not sale prices) to Sonny's campaign for the month of November.  These include custom designs.  Thank you so much!

For updates on Sonny, to keep in touch, and to easily share his story, please visit his support page on Facebook.

The truth about pets, babies, and YOU.

Are you one of those people who adore your animals and let your child adore them too?

Even if you're not, YOU can benefit from this infoblogercial (so I made up a word, not the point here) about pets and babysitting.

Are you a babywearing, baby attachment kind of parent?  Dogs are great for you.  They respond to the child's every noise and lick them clean of their own vomit.  It's really kind of a win/win situation.  Not to mention, your baby probably likes the dog better than you already.


Are you a cry-it-out sort of parent?  Cats are what you want.  They are the master of disdain and can teach your child to potty in the litter box.  You heard me.  No more diapers.  Train them early.  Plus a cat can listen to a child screaming all night without "giving in."  If you're intending on going overnight for a little fun time with your husband, hire a cat.  You'll have a new baby by morning.

Not to mention, pets are far cheaper than nannies or babysitters.  Feed them a treat or two and they'll be yours to love forever.  At least around dinner time.  Or breakfast.  Or when you're sitting in the bathroom trying to get a load out.  And when you really want to hoard those brownies, you can just brightly say, "Oh, Mr. Nibbles can take care of that!" as you sneak away with warm, gooey, delicious chocolate wonderfulness.  How awesome is that?  Sitters on demand!

Just remember to keep the toilet lid closed when you're done in the bathroom... You're doing cats all over the world a favor. 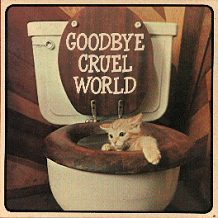 Email ThisBlogThis!Share to TwitterShare to FacebookShare to Pinterest
Labels: I am so definitely absolutely a terrible mother, inappropriate humor

In which teeth are evil and chocolate reigns supreme.

My child's new favorite game is sitting on my lap and watching my monitor.  He also loves to bang on the keyboard.  I'm fairly certain this is a sign that he's going to grow up and create new fantastic technology and become richer than Bill Gates could ever dream of.

In other news, I've learned one new fact of life.  Teeth are evil.

You may not think much of this, as you chew on your hamburger or nibble away at a delicious, buttery corn on the cob.  It might be a vague thought as that nagging little cavity spasms in pain as you get halfway through your bag of Skittles.  It's kind of on your mind when you're pregnant with your first kid and think, "Man, everyone says the teething is the worst."  But you don't have a clue.

L.J. doesn't even have a hint of pearly bits on his gums.  While this makes me happy (toothless baby grin is my favorite way to wake up in the morning), it also makes me feel this nasty little sense of dread.  Like, how much longer do I have to put up with this?!

He screams.  He shrieks.  He flails about.  He acts as though I am killing him when I try to coax him to nurse a little longer.  He chews on anything he can get in his mouth, and some things he can't.  He won't sleep.  He's too tired to sleep.  So go to sleep, you little bastard angel.  You'll feel better when you wake up!  But does he listen?  Of course not.  Because babies know everything.  Which is why we're miserable.

However, in the midst of this agony (in reality, this is nothing compared to "real" teething when cutting teeth, or so I hear) he has had some wonderful changes.  He can now hold his bottle by his little baby hands.  He constantly shouts/yells/mumbles/squeals "Mamamama dadadadadada babababababa", which is his new favorite sound.  He can latch onto a nipple from about 10 feet away with unerring precision.  And he's just plain gosh darned cute.

Motherhood.  Gotta love and hate it.  If you want to survive it, just grab a pan full of brownies.  It'll get you through at least a few hours.  And no, you don't feed it to the baby.  What a waste that would be... You don't think moms and grandmothers bake cookies for the kids, do you?

Email ThisBlogThis!Share to TwitterShare to FacebookShare to Pinterest
Labels: chocolate is my savior
Older Posts Home
Subscribe to: Posts (Atom)